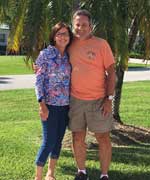 Kimberly Adam sank into a deep depression after having a stroke in 2018. She couldn't stop crying or shake her feelings of worthlessness.

At first, daily outpatient treatment at a local hospital helped ease her symptoms. But in the fall of 2019, her depression returned.

“The depression and anxiety I felt was worse than the stroke," says Kimberly.

Even though she was seeing a psychiatrist and taking her prescribed medication, her depression got worse. So, her doctor admitted her to UPMC Western Psychiatric Hospital where she learned about electroconvulsive therapy (ECT).

ECT is one of the most common treatments for drug-resistant depression.

"At that point, I would've done anything if there was an ounce of hope that it would work," says Kimberly.

Doctors perform ECT under general anesthesia in which they pass a small electric current through the brain to trigger a brief seizure.

The seizure can cause changes in the brain that can quickly reverse symptoms of certain mental illnesses, like severe depression.

After about 20 treatments, she noticed her depression symptoms were starting to improve.

She noticed further improvement in December when she hosted a Christmas dinner with her children and nine grandchildren.

“I had a lot to worry about — the shopping, the cooking," says Kimberly. “The stroke had affected my right hand, so I worried about getting it all done."

But the dinner was a great success.

“I'm not sure I would have been able to do it without the ECT," she says.

"I don't feel like my old, depressed self. It's a new way of life," she says.

She now enjoys an active lifestyle and splits her time spending summers in Pittsburgh and winters in Florida. When in Florida, she uses FaceTime to talk with her kids and grandkids.

She enjoys biking, going to the gym, shopping, attending bible school, and other pursuits. She has also made many new friends.

Her family has noticed the changes, too.

"It's so good to see you smile again — your smile is your best accessory," says her daughter-in-law, Heidi.

"I haven't seen this much energy from her in a long time," says Kimberly's husband, Tom.

To anyone dealing with depression or thinking about ECT, Kimberly has a message.

"You don't have to fear ECT. You can expect some side effects and it's not an immediate cure. But if you're suffering from serious depression and nothing else is working, ECT may help."

For more information or to schedule an appointment with the Center for Interventional Psychiatry, please call 412-246-5063.