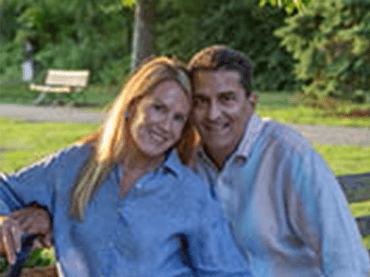 The Challenge: Living with Chronic Conditions

Leah and Jim had plenty in common, even years before they met through mutual friends over a workout. However, in addition to pursing an active lifestyle, they quickly discovered they also shared diagnoses of debilitating forms of inflammatory bowel disease.

Leah was diagnosed with Crohn’s disease when she was 13 years old, and Jim with colitis when he was 14 years old. Although both conditions are forms of inflammatory bowel disease (IBD), Crohn’s disease and colitis actually affect different parts of the body.

Crohn’s disease is a chronic inflammatory condition of the gastrointestinal tract, which commonly affects the small bowel and colon; whereas colitis involves ulcers on the lining of the large intestine.

Symptoms of IBD can include:

Since symptoms can arise at any point, people with IBD have constant apprehension as to when their condition may flair up. Both Jim and Leah made it a point to persevere through their disease with little setbacks. However, dealing with these conditions as teenagers in high school and college took some adjusting.

“[College] was a tough time, because you experience a whole different lifestyle on your own and also deal with peer pressure. You do not want to show any weakness or that you’re different, however, you’re living with a disease where, from the outside, there’s nothing different about our lives. It is what happens behind closed doors,” Jim said.

Jim and Leah sought an un-prescribed relief from IBD through talking to others in similar situations, as well as volunteering with the Crohn’s and Colitis Foundation of America (CCFA), a non-profit organization dedicated to finding cures for IBD.

As a teenager, Leah became active as a camp counselor, also helping to plan gala and fundraising events. Likewise, Jim applied his passion for golfing by enrolling as a member of the committee responsible for planning the annual CCFA golf outing.

In describing the importance of talking with others who have similar conditions, Leah explained the constant hardships that she faced with her condition.

Both Jim and Leah, unbeknownst to each other, found their way to the UPMC Inflammatory Bowel Disease Center in hopes of restoring a positive outlook for their condition.

The Path to the UPMC IBD Center

After spending years in and out of doctor’s offices, being prescribed different medications, and even an ostomy surgery in Leah’s case, both followed a path to the multidisciplinary team of gastroenterologists, nutritionists, and other digestive experts in the UPMC Inflammatory Bowel Disease Center at UPMC.

Jim explained that upon first meeting with the group at UPMC, he “switched medications and reached a point where things started getting better, which helped to build an immediate bond.” The results were similar for Leah, who explained that “in our moment of crisis, the doctor and his team ended up finding a great band aid to get us through, mending us to the next level of health.”

Leah continued to say “As a patient, the beauty of the IBD program at UPMC is the ‘one-stop shop’ nature. I have never left my appointments wondering about mental health, diet, or nutrition, because every aspect of the disease is addressed.”

One aspect of particular importance to Jim was UPMC’s willingness to participate in clinical studies in search of new techniques for IBD management.

“There’s calmness to knowing that they know what is coming down the pipeline. If there is a new approach or a new medication that is available, I have confidence that they are the first to know,” he commented.

The Solution: The Ultimate Connection

Both Leah and Jim have been patients of the UPMC IBD Center for nearly ten years, during which time they’ve experienced success with new medications, restored an active lifestyle, and even ran two marathons.

However none of these personal milestones compare to the ultimate happiness of becoming husband and wife in August 2014. Even as the big day approached, Jim experienced some of the same symptoms that led him and Leah to finding they had so much in common years earlier.

“Before the wedding, Jim had run into a bout of bad health. It was the team at UPMC that fixed Jim to get him moving that day.”

Having been diagnosed at such an early age, Jim and Leah understand the importance of connecting with others with the same conditions. And, they explain, this has become a big part of their relationship, allowing them to connect on a new level.

They encourage others who may be struggling with forms of IBD to talk to others who have it.

“To have a medical professional tell you that things will be okay is comforting, but there is a different comfort that comes along with talking to others dealing with the same conditions,” Leah said.

As Leah and Jim continue to reminisce on the past several years of individual and joint milestones, they feel the future will be extremely promising. Not only has traveling to doctor appointments become more convenient, but through their IBD treatment journey they managed to find in each other a soul mate to help them face any obstacle.

Jim and Leah's treatments and results may not be representative of all similar cases.