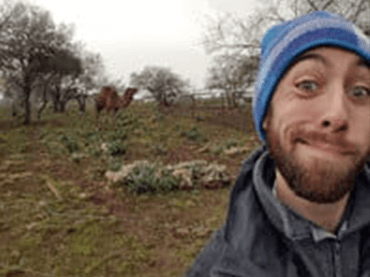 Sean Shapiro was only 18 when doctors diagnosed him with ulcerative colitis. But he wasn't about to let it hold him back from doing everything he loved. He was an athlete and played competitive soccer all through high school.

But when he went to college, his symptoms got worse.

He had regular flare-ups every time the temperatures dropped as Fall turned to Winter. His symptoms flared again as Winter changed to Spring.

Sean spent a lot of time at the campus health center. He also spoke often with his gastroenterologist in Pittsburgh who would prescribe him steroids over the phone.

The toll on his body really struck him when he took up an interest in mountain biking.

“I considered myself an athlete,” Sean said, “But I had to fight to maintain even an average fitness level. When I was having flares, I was going on six or seven-mile rides and I would just get so tired.”

Three years after his diagnosis, Sean’s flare-ups grew so intense that he had his first hospital stay at UPMC Presbyterian. He was there for three days.

The next year, he was in the hospital again. Since his medicine didn’t seem to be enough, he decided to explore other treatment options.

“I visited a holistic health coach and dietitian. It was a bit of a lifestyle change in terms of trying to eliminate all sorts of food. I cut down my sugar intake as much as I could and cut out dairy, red meat, and gluten.”

These diet changes did seem to help.

“But the restrictions were so strict that it was hard to maintain, and I was still having small flares. When I slipped on the diet, I ended up back in the hospital.”

His “final flare” started in September of 2014. He was working in IT and spent a lot of time working remotely until Thanksgiving when he was back in the hospital. That flare lasted until February of 2015, and he lost a lot of weight.

At this point, Sean felt like he had tried everything. That’s when his doctors at UPMC suggested surgery.

For people with ulcerative colitis whose symptoms are mostly in the large intestine, this surgery can be highly impactful. And for Sean, the impact was huge.

“Both of my doctors were really great. I was in rough shape, so I was glad to be in such good hands.”

The Results: Biking More Than 200 Miles

“Since the J-pouch surgery, I’m going to the bathroom less. I feel great, and I’m focusing on getting in better shape.”

He spent an entire summer in Oregon, mountain biking every day. That summer — healthier and stronger than ever — he was able to bike more than 200 miles.

In June of 2017, he biked in a race that was 19 miles long. He’s excited to keep doing more, to keep pushing his now-healthy body farther.

At the same time, he’s so grateful to UPMC that he volunteers a lot of his time working with other IBD patients.

He also served on the 2018 and 2019 patient expert panels for IBD U.N.I.T.E. This program informs patients and their loved ones about IBD treatment. And, through IBD Connect, he visits and supports people in the hospital with Crohn’s disease.

Suffice to say, Sean’s life has changed for the better.

“Surgery was a complete lifestyle changer.”

Sean’s treatment and results may not be representative of all similar cases.