Having heart disease increases your chances of having a stroke, so it’s important to control the risk factors:

Strokes require immediate medical attention, so knowing the warning signs is crucial. Stroke symptoms can include sudden onset of:

UPMC Northwest’s stroke program was named an Advanced Primary Stroke Center by The Joint Commission, and is the region’s only facility to earn that designation.

The hospital also received a Get With The Guidelines®-Stroke Gold Plus Performance Achievement Award from the American Heart Association (AHA)/American Stroke Association (ASA) in 2009, 2010, and 2011, and met the criteria for the AHA/ASA Target: Stroke Honor Roll in 2011 .

Physicians at UPMC Northwest have 24-hour-a-day access to specialists at the UPMC Stroke Institute in Pittsburgh in order to bring a higher level of stroke treatment and care to their patients. Real-time telemedicine consultations are provided in several other specialties as well. 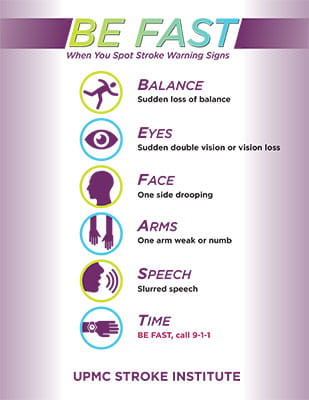