Dr. Sarkaria is a member of the major national and international thoracic surgical societies where he has lectured extensively, and has been involved with committees for resident and fellow education, health care policy, and neuroendocrine lung tumors. His administrative responsibilities in the Department of Cardiothoracic Surgery at UPMC include Vice Chairman for Clinical Affairs, Director of Thoracic Robotic Surgery, and Co-Director of the Esophageal Surgery Institute. 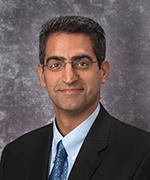